Nick and Tav were at the
bottom of the pit, the rate at which the buckets were being filled suggests
that it was Nick digging, Tav clearing. Jon was, also clearing and loading the
filled buckets and rocks into the skip at the top of the pit. This was hauled
up the slope by Mike. The slope was lubricated, every now and again by the
application of a little water. Mike found out later that the bucket of water had
a leak and he had a damp bottom and leg.

As they had arrived a
little later, Vince and Roz took on the spoil management role, emptying and
cleaning the buckets, distributing the sediment to ensure all available space
was being utilised fully. There was a bit of wall building too. 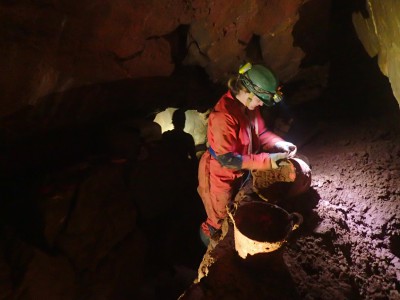 Roz cleans another bucket, in the background, Mike awaits the next load.

No-one counted, but a lot
of buckets were filled and emptied, rocks moved too. A lot of spoil was shifted