On arrival at the dig
site at the top of Wookey 20, it was noted that, after a dry week, the puddle
had drained away. 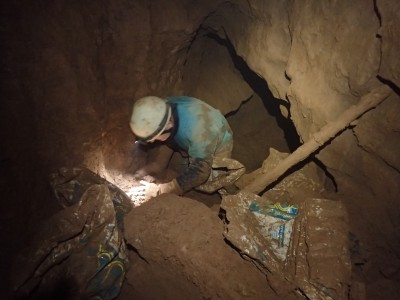 Vince was digging, Tav
assisted clearing filled bags away, and he filled a few too. Jon was at the
skip “station” loading the bags (and a few buckets) to Nick, who was hauling up
the slope and emptying the filled receptacles onto the ever-growing spoil heap.
There was some discrepancy regarding the total number of loads because no-one took
the responsibility of counting. By consensus, we arrived at a figure of
somewhere around 40 to 50 loads. Does it matter? Probably not, stuff got moved,
that’s the important bit.

Another fun evening in
Wookey Hole!