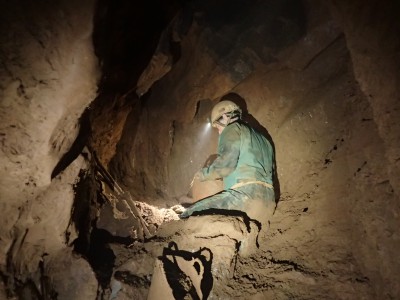 Nick, returned from his
travels (work-related), was digging, I was clearing away the filled buckets, replacing
them with empty ones. The buckets were passed to Tav, at the top of the pit, he
was loading them into the skip. The skip is rapidly deteriorating and really
needs changing. Jon was at the top of the slope hauling the skip away, every
now and then, adding water to the slope to ease the passage of the loaded skip.
Mike was diligently, disposing of the spoil onto the heap, ensuring that all
available space was, well and truly, filled.

All was well until it
came to the final load tally, which turned into an ongoing debate. As nobody
seemed to have been counting, a possible compromise was reached; 60 loads (last
week’s tally) + an extra person + 20%, a total of 72 was arrived at. This was
then complicated by the fact that we had used only buckets, this was likely to
have been more efficient – a factor that hadn’t been applied. We are still
debating, it is unlikely that we are ready for a meaningful vote or asking the
people to have a vote quite yet.

It was, though an
enjoyable and productive session.